Posted on December 6, 2011 by angryswede

There’s something to be said for sharing tent space with friends. As the time increases Something akin to a telepathic connection develops.

Conversations can be carried on in one word sentences, and hysterical bouts of laughter lasting minutes can be triggered with a glance.

Upon return the city folk will look at you with a crooked face and ask “What happened to you guys out there?”

What happened you ask? I’ll tell you, but it won’t help explain. You’ll just have to create your own adventures and then maybe after you’ve endured an experience of your own will you begin to get IT.

This is what went down:

Friday evening after work and a rare traffic free approach from Boston we hit the trail for once getting a head start on our adventures to come. Temps were below freezing and snow fall was tapering off leaving a fluffy 1″-2″ where the wind couldn’t blow it away.

After a quick but eventful mile with river crossings, mud in the consistency of a half frozen freezer pop and wetness in general, we scouted out a suitable campsite location off the trail. We constructed a fantastic fire pit and carefully arranged the fuel for our fire. Tired and cold we were all excited by the prospect of sitting around the campfire eating some hot apple turnovers. A strike of the match interrupted our fantasies and the glow of the match grew our tinder of dryer lint covered in vasoline.

Not even a hiss or crackle and the ball of light pathetically faded out. Everything was soaked and cold. We valiantly kept at it for too long, and finally attempted to cook the turnovers with bitch bark flames. Failing miserably of course. We called it quits at 1:30 AM negating our evening head start with a clear late start and lack of sleep following in the morning.

As morning came so did our outlook. 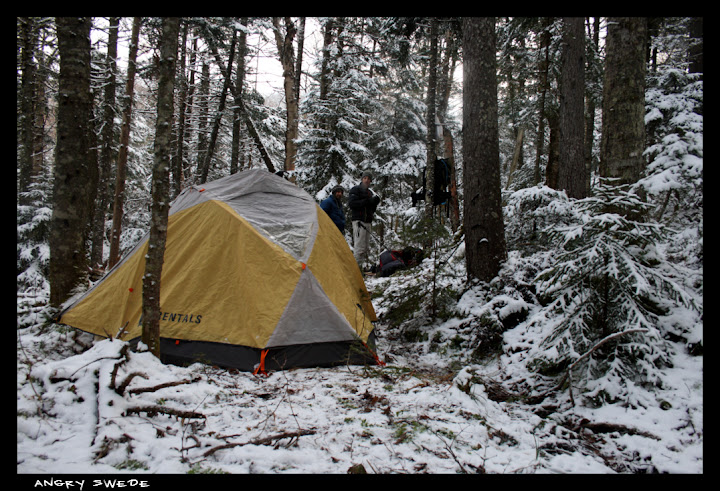 We could put our lack of sleep behind us over a hot cup of joe and tasty breakfast burrito’s.

Let me say that Breakfeast Skillet by Mountain House with some cheese on a tortilla is very choice and if you have the means i highly recommend it.

Our bodies and minds back at neutral we plodded up the super scenic Ammonoosuc Ravine Trail.  We could see the valley’s below spared from winter’s snowy strike. 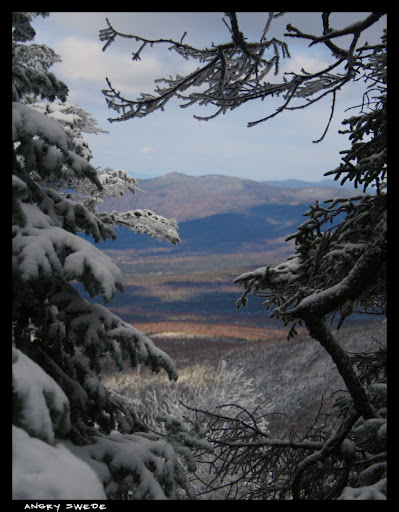 We climbed along frozen cascades 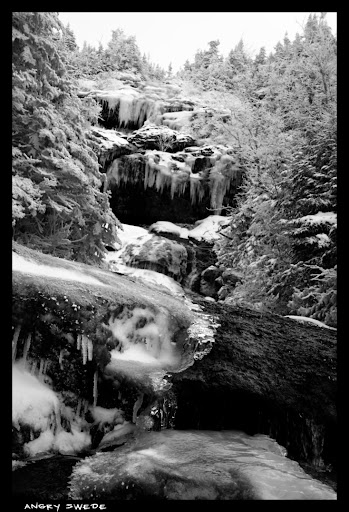 and eventually entered the alpine zone, leaving the trees below us, for a very long while. 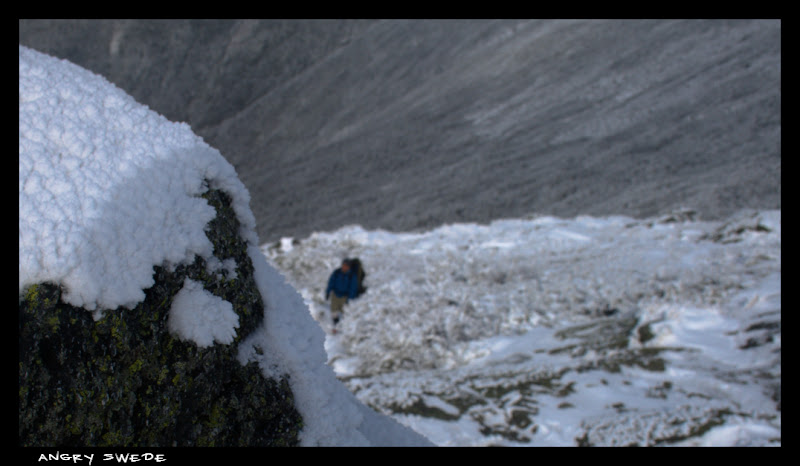 Lake of the clouds hut greeted us sitting quietly; empty and boarded up for the season. 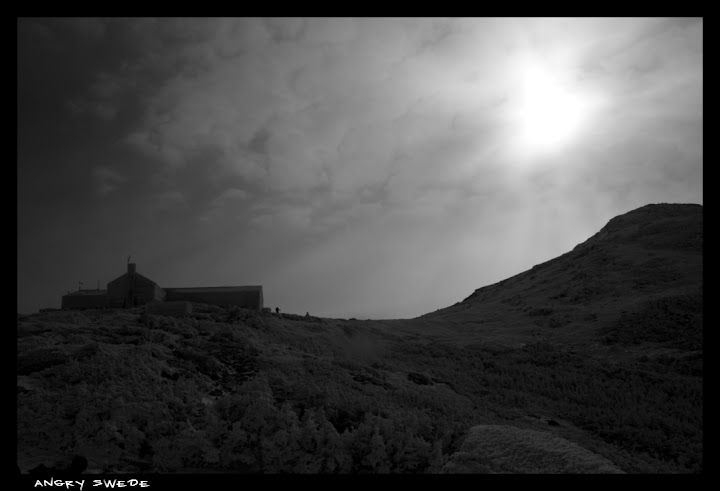 Monroe a quick jaunt to the south, Washington to the north. 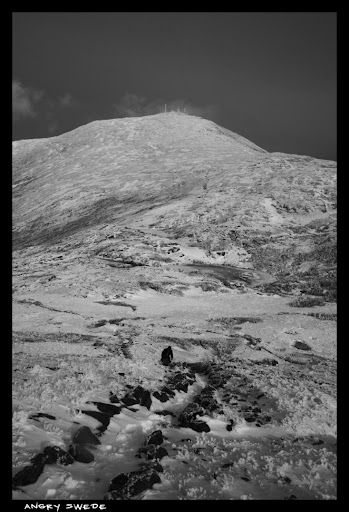 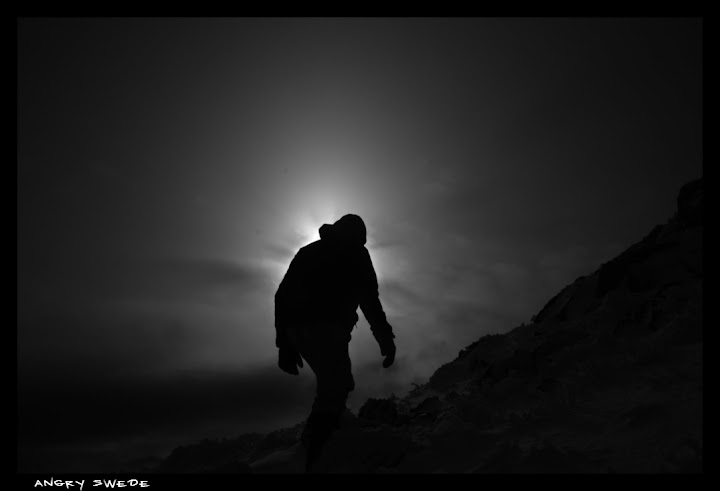 On top ‘o that mountain. 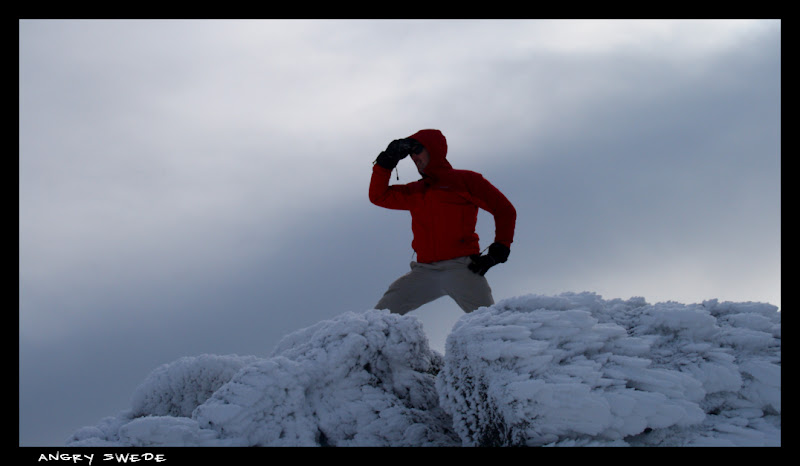 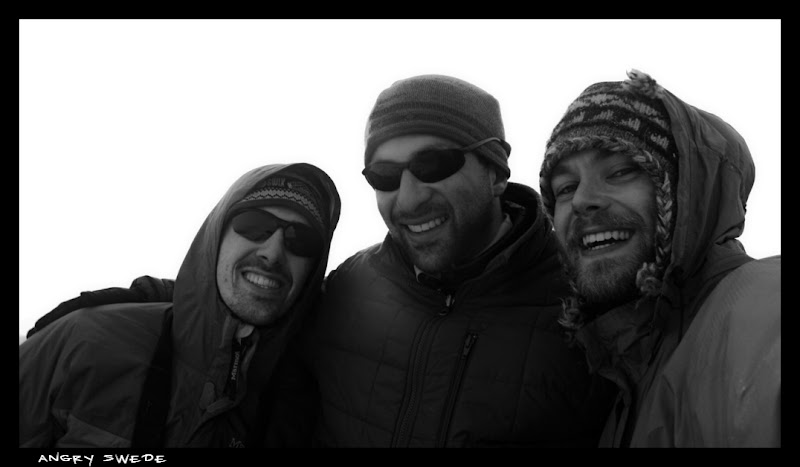 Clear skies all around. 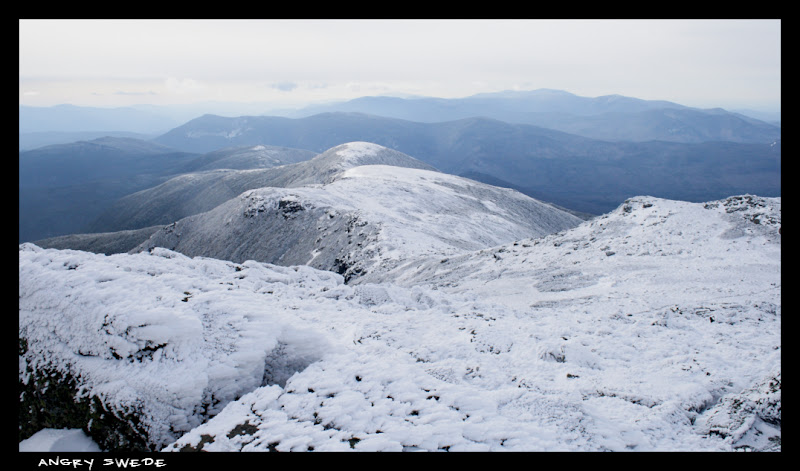 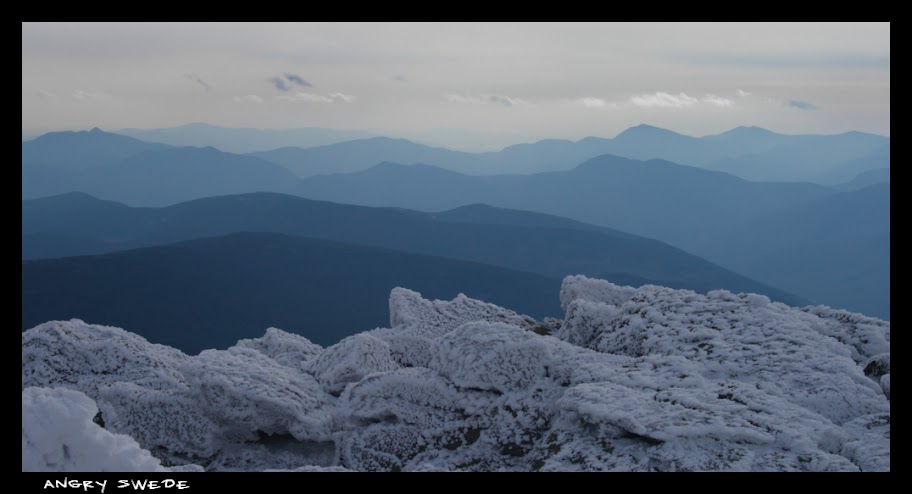 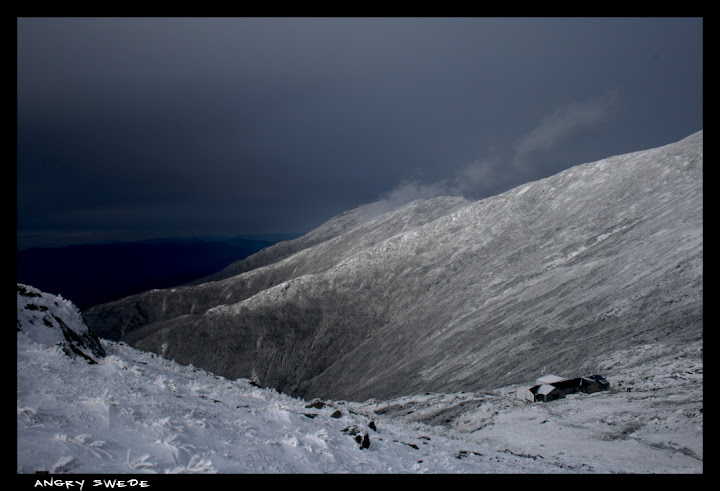 Monroe in the distance, we make our way to the next. 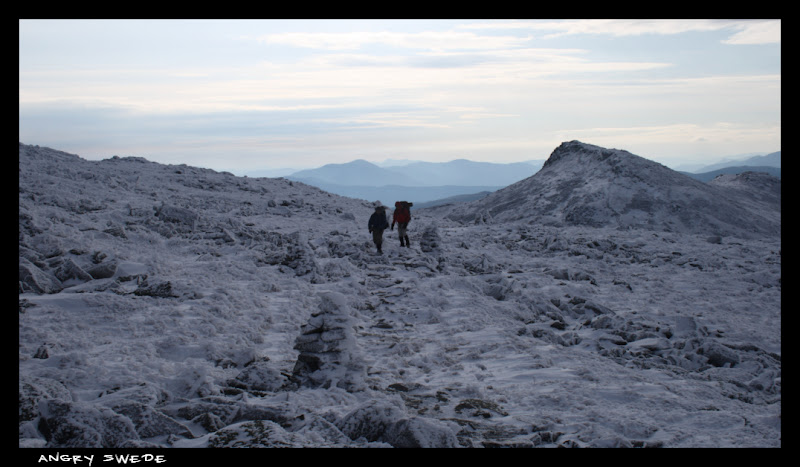 That sequence really was awesome. (no sarcasm)

The summit cone of Washington proved to be a much different environment from the brisk winds and clear skies of Madison.  The visibility was shifting second to second as clouds flew by and hurricane force winds blew us every which way.  We paused at the summit for just long enough to snap a shot and ran backwards off the rockpile shielding our faces with our backs. 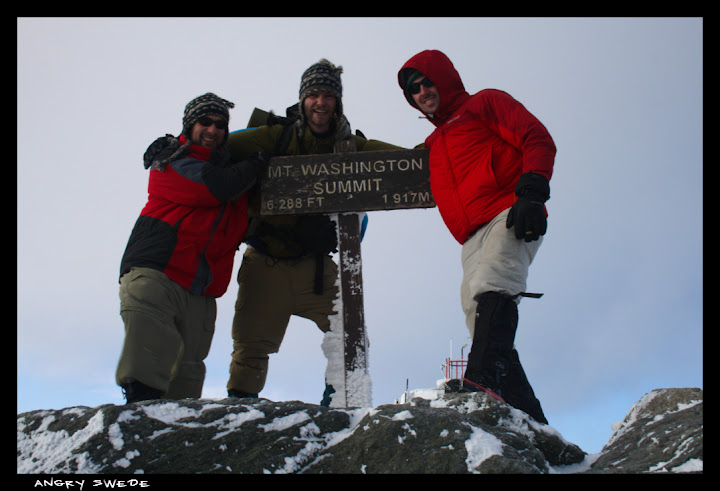 Off the summit the winds would not relent, but sun kept fighting through the rolling in clouds. 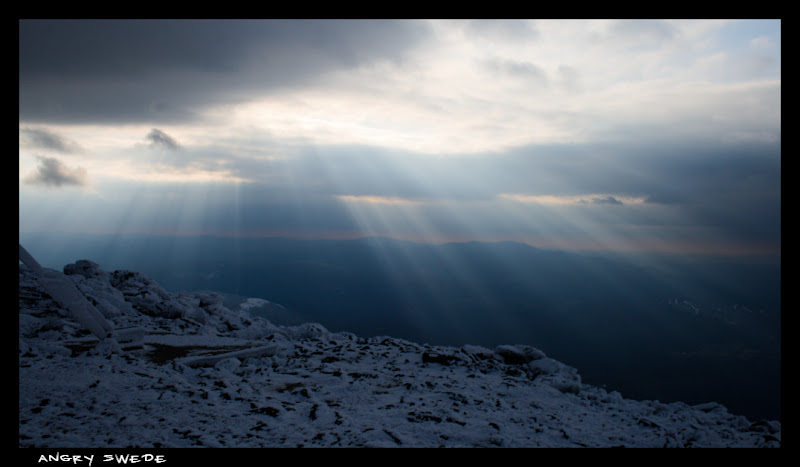 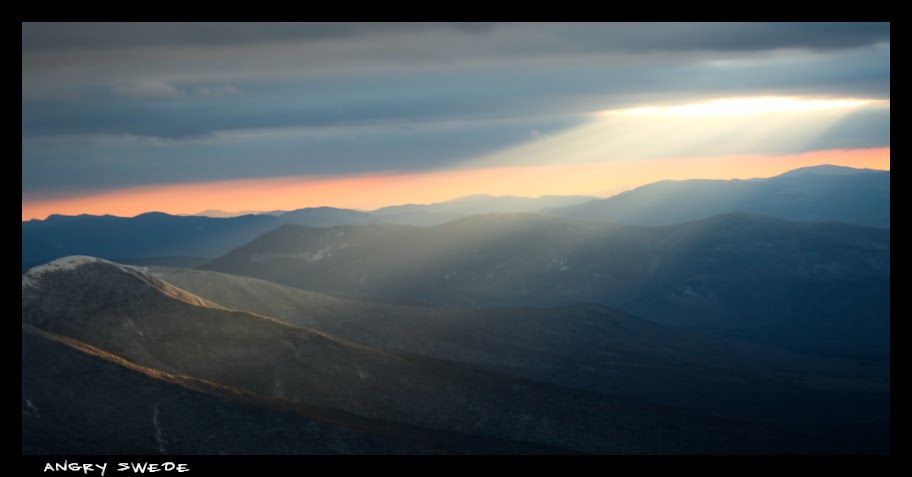 The beautiful scenes weren’t enough to take our minds of the hurricane force winds hammering us.

Average wind speed recorded on Washington’s summit this day was 49mph with a max speed of 95mph.

The wind altered our plants of hiking along the presidential ridge to our favorite cabin, Grey Knob.

Mucking up the first turnoff down the west side we stubbornly kept going to the next trail added a few miles to our round trip.  Still on the exposed ridge, we crouched behind cairns to find respite from the howling winds. The sun set while we were still on the ridge, and we were left in dark hidden from the moon by a thick cloud cover. 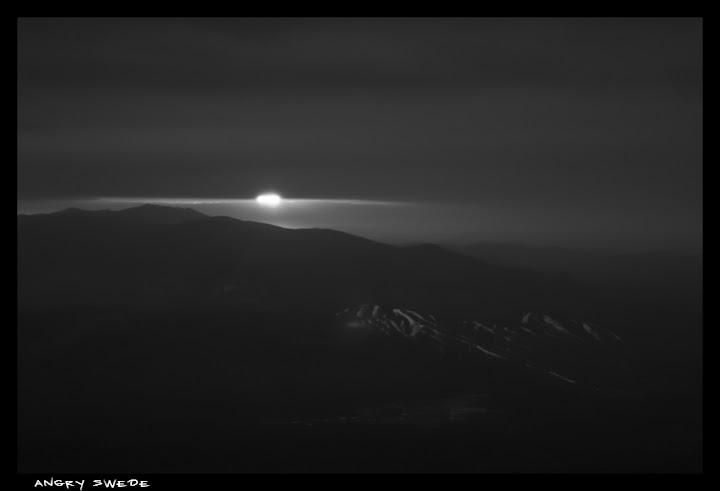 At last we turned west down the mountain.  Unfortunately we were now marching directly into the the wind.  It was blowing so hard that the snot from our runny noses felt like it was making it’s way into our brains.  The Caps ridge trail proved a tricky beast with some rock scrambles required and several false tree lines.  Our tired bodies not amused by these cruel jokes.

What seemed like an eternity later, the actual tree line was breached and a suitable tent site was claimed.  We celebrated shelter from the ferocious winds by feasting on burritos, cheeses, cured meats, and craft beer.  We cooked everything on the  stove in the vestibule from inside the tent and our sleeping bags.  Now that is comfort food.  More of the same for breakfast and plenty of dilly dallying later we were on our way.  On our way back to civilization. 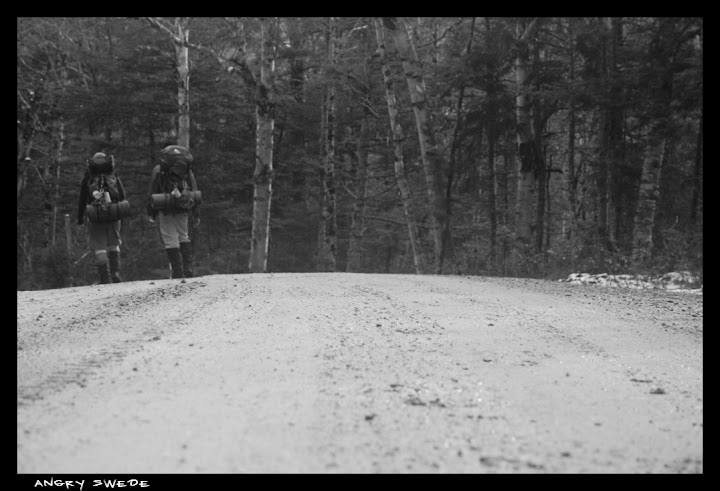 Looking back, did I enjoy searching the beam of my headlamp for the next cairn while the wind burned my face?  Of course not, but I’d surely not trade in the experience.  Am I a gluton for harsh environments?  Maybe.